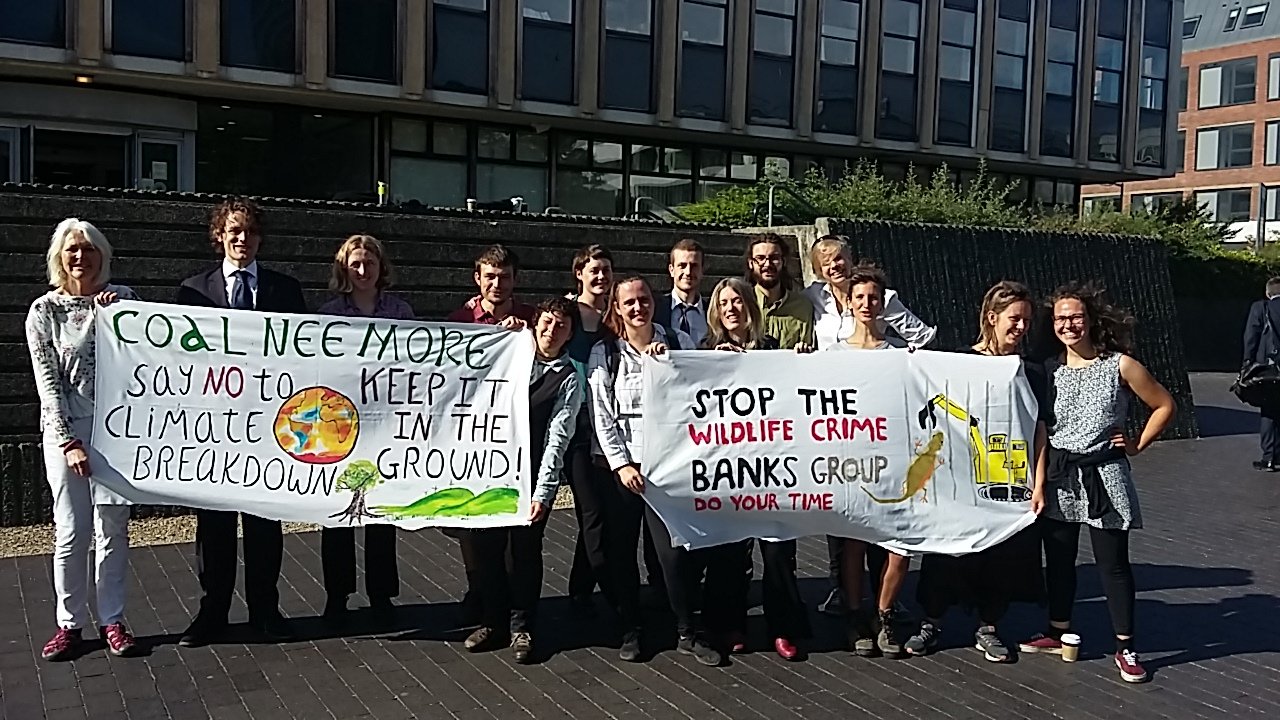 The protestors were found not guilty by District Judge, Helen Cousins, due to the prosecution failing to demonstrate that Banks Mining activity at the site was lawful. Indeed, the protectors were aiming to prevent Banks group from committing a wildlife crime, the destruction of the habitat of Great Crested Newts.

This comes after a four-day long trial in which the protestors defended their actions on the basis that they were preventing Banks from carrying out unlawful activity at the Bradley site. The defendants argued that Banks would be committing a wildlife crime through the disturbance of the protected species of great crested newt and their habitat. The judge accepted that a great crested newt was found on site by the protestors, and stated that the ecologist employed by Banks had not used the appropriate methodology to confirm the absence of protected species, hence the acquittal.

One of the protectors who appeared in Court today said: “This is a victory. It proved that Banks had not taken the appropriate measures to protect the ecology of the site. However, it is bitter sweet. Brooms pond has already been destroyed and the fact that Banks are still extracting coal will only serve to further the destruction of delicate habitats and accelerate global climate change.”

Another said “Today, the legal system has deemed our actions to be legitimate as these species are protected by law. Now we need laws to safeguard ecosystems and the planet from damaging fossil fuel extraction and combustion. The struggle is far from over. Fossil fuel companies need to be held accountable for their profit driven activities that are directly responsible for climate breakdown. All fossil fuels need to be kept in the ground if we have any hope in minimising the effects of climate change.”

Protectors were facing criminal prosecution for actions that were necessary to prevent the destruction of the protected species and the onset of catastrophic climate change. At the same time, fossil fuel companies like Banks Group operate with impunity to disregard environmental law and government guidelines for reducing fossil fuel emissions. The government has announced that coal must be phased out by 2025 in the UK, yet it continues to allow coal companies to extract coal and pollute the atmosphere. As long as this continues, we must take matters into our own hands to prevent the most severe effects of global warming and biodiversity reduction.

Indeed, whilst it has come to light that Banks Group acted unlawfully in their destruction of protected species, another crime continues: coal is still being dug up and burnt – polluting the local envrionment and fuelling deadly climate breakdown. Yet as Banks Group continue their assault on people and planet, the court decided that this powerful corporation needs protection from a small group of moral, impassioned individuals. All six protectors were handed a restraining order to stay 300m away from Banks Group sites for 12 months. Restraining orders are usually implemented to protect victims of stalking, domestic violence and sexual harassment, not to protect private profit. With this direct action at Pont Valley proving to be right on both moral and legal grounds, the state responds with disproportionate protection of those causing the real damage and an attempt to silence dissent and suppress our human rights to protest and assemble. 7 additional protectors will be appearing in Court on October 30th and 31st for charges related to obstructing the highway.

There is a residual population of GCN in the Pont valley, found in various surveys by UK coal in 2014, the mining company who originally gained permission to open cast in the valley. In the planning permit, UK Coal acquired a license to translocate the great crested newts to four new ponds in 2010 in order to comply with regulations on protected species. However, the survey carried out in 2017 by the ecologist employed by Banks group failed to detect the presence of GCN using EDNA testing, a contentious form of surveying. The ecologist said he was surprised and even unsettled by the negative results.

On advice of the ecologist, Banks mining say that they assumed there were no more GCN present and decided to start work without a licence, however the ecologist also stated that he wasn’t comfortable with this assumption. GCN are however long-lived species, so if they were found at the ponds in 2014 it is highly likely that they were still there when the survey was carried out in 2017. In fact, the trial shed light on the ecologist’s flawed use of the wrong test, and against best practice and guidelines. Banks’s ecologist used EDNA testing which is not the appropriate methodology when one is dealing with a low population of GCN, and only used two samples when EDNA testing requires 20 samples.

Protectors found a great crested newt on site on the 17th of April using pitfall traps. Durham Police Force failed to thoroughly investigate when the wildlife crime which Banks Group were about to commit was reported to them, as the company would be disturbing a European Protected Species’ habitat without a Great Crested Newt License.

After the protectors had found a GCN on site, Banks mining response was not satisfactory to prevent a wildlife crime. The ecologist decided to conduct more surveying of the population of GCN, using refuge method which is also inefficient compared to pitfall trapping, but was not able to detect the presence of GCN. Banks group should have carried out more work to prevent newts from being killed and their habitat destroyed.

A FOI request revealed an email between Banks and their ecologist discussing what ‘downsides’ there would be to accept that a newt had been found, and what best cause of action to take to avoid delays to the mining project. Other emails were revealed where the GCN population is referred to as a ‘constraint’ and that ‘it’s all a matter of timing.’ More alarming is that most of the emails are redacted, we wonder what Banks truly considered was the best move when they had a tight deadline to comply to in order to trigger planning permit.

The front of the site has now been heavily stripped, and the habitat of the GCN is no longer existent. Banks started draining the pond on the 18th of May, in front of the local community opposing the opencast in their valley.