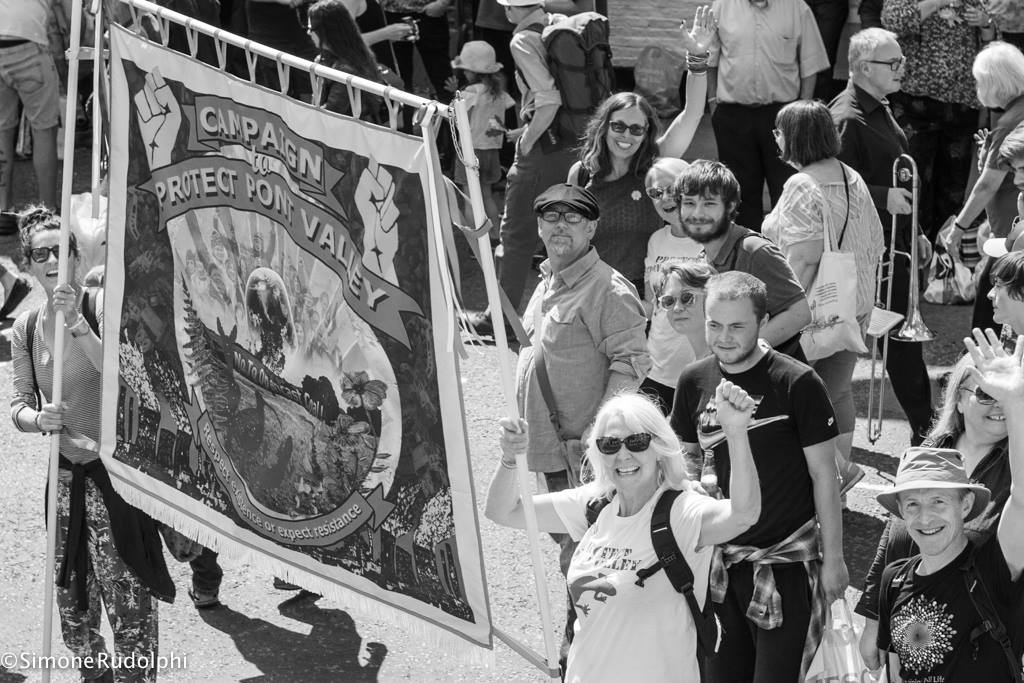 On Saturday 14th July 2018, The Campaign to Protect Pont Valley marched under it’s banner in the 134th miners’ gala organized by the Durham Miners Association. 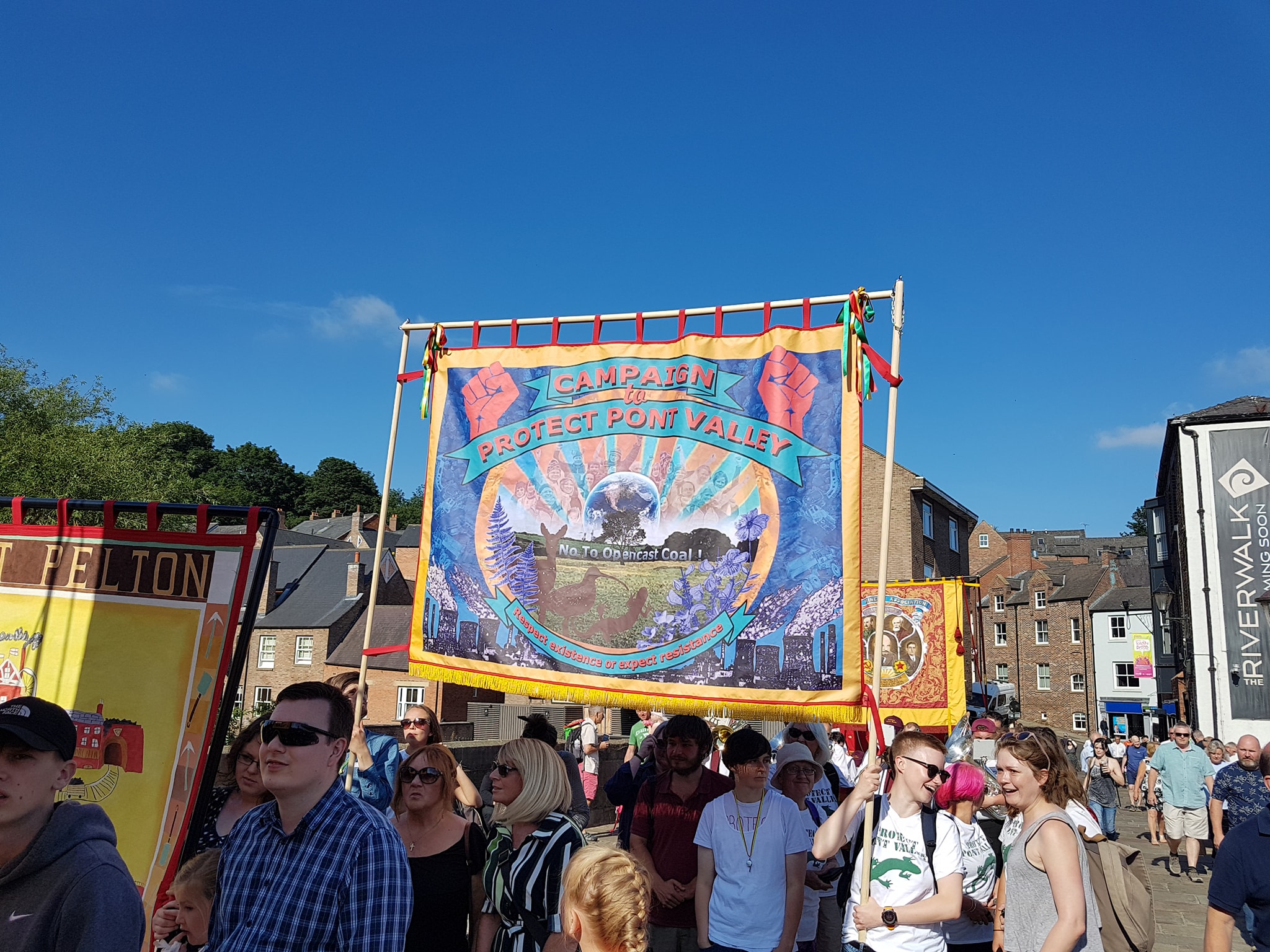 Our campaign is pleased to have the support of DMA. Allan Cummings, DMA Secretary said in May 2018:
“The Durham Miners’ Association has opposed opencast mining for many decades and support the locally lead campaign to protect Pont Valley in Co. Durham. It damaged deep mining in the past and now threatens to ruin our environment for no perceivable benefit. Our communities have suffered enough with the decline of the coal industry and they do not need to have more injury added to insult. There are deep mining projects reopening in various parts of England. So, there is little need to rip up the countryside.”We have gathered reflections from some of those that marched with the Protect Pont Valley banner at the gala.

Jackie:
“It was great that the Miners Association backed the Pont Valley campaign to march with the coalfield banners. Generations of my family have come to walk with The Tempest banner. The sight and sound of banners and brass always chokes me. Being there with everyone, standing together, means we’re keeping the memory of our communities strong. It means we still have a touchstone on the good stuff!”

Izzy
“It was an honour to be part of a tradition that celebrates and strengthens the labour movement. We all owe so much to those who fought battles to secure our rights. It was also an important reminder that while you might loose a battle, there is strength in unity. We can come together and move beyond it, for something bigger.”

June:
“At almost every point in the campaign the right thing or the right person has come along at the right time. Taking part in the 134th Durham Miners’ Gala grew from a small seed of an idea back in March when some of us took part in a meeting of the Women’s Banner Group at the Miners’ Hall. The thought of creating our own banner and marching at the Gala felt empowering and right. It could have been a fleeting thought, but it grew and before long a banner making artist appeared at the roadside protest site, a friend of a friend. A local print company offered help, and we connected up with a local textile company. Our visual and written messages were collected and artistically interpreted to create a positive feel banner that represents and defines the Campaign to Protect Pont Valley. It’s reflective of traditional miners’ banners with a contemporary feel. The images are clear from a distance but have enough detail to make the banner engaging from close up. It depicts the threat of open cast mining in shadowy blue all around and the encircled gold framed valley, as the campaign would wish to keep protected in its natural state. The world image and the people behind indicate the impact globally of this local message. The sun rays are joy and hope. It felt amazing to be in the crowds streaming toward the riverside meeting place with new people I’d come to know and value over the last 6 months and old friends who I’d opposed the opencast with for decades. A very poignant yet proud day.”

Suzie:
“As a new resident in Durham it was amazing to be part of a Durham tradition and learning about the mining history. It was also wonderful to be part of the Pont Valley Protection banner as we all came together in solidarity against corporate wealth, and protection of communities which was the foundation of the north eastern miners’ struggle. A collaboration of mining past and present.”

Bobbie:
“I have grown up attending the miners gala from a very young age, and feel privileged to have grown up with the wonderful mining heritage of the north east surrounding me. I grew up in a mining village, and come from a family with mining history. However, I was beyond proud to attend this year, and march with the Campaign to Protect Pont Valley Banner.  It is a campaign very close to my heart, and a valley that holds my heart. Watching the destruction grow every time I drive home is breaking my heart. I was proud to be able to attend an event celebrating my heritage, whilst campaigning for our future as a global community. I was proud to see these two worlds collide, and I hope that the heritage of this area is not lost or forgotten, but that we learn from it, and move forward. This is an area that has lost its industry, but open cast mining is not going to bring that industry back. All it is doing is bringing short term work, when we should be investing in this region, and empowering the people around us. The mining industry isn’t coming back, but it is important that we remember it as it’s where we are from. It was a privilege to be able to attend an event so entrenched in our history with a forward-thinking movement. It’s time to move forward.”

Julia:
“It was a day of sunshine, strength and solidarity as supporters of the Campaign to Protect Pont Valley gathered together to say ‘No to open cast coal’ at the ‘Big Meeting’. There were smiles, hugs and lots of laughs. We took turns to carry our magnificent banner and walked along the Durham streets with real pride. With my fellow campaigners I felt a sense of belonging and connection, not just between us, but with so many others too. People stopped me and congratulated us on the strength of our fight and commented on our banner. We still have a big battle on our hands – living next to Britain’s newest open cast mine is utterly depressing for so many reasons – but on Saturday we felt strong and resilient, powerful and united. We are still here, and joyfully we made our presence felt.”

Annie:
It was a surprise and privilege to see my face on our wonderful banner. The solidarity and feeling of unity along with the brass bands made it an experience to remember. I loved the way activists and locals came to join us at different parts of the march. News and hugs were shared. Well done everyone!”

Thank you to artist Jane Gower for the terrific banner. 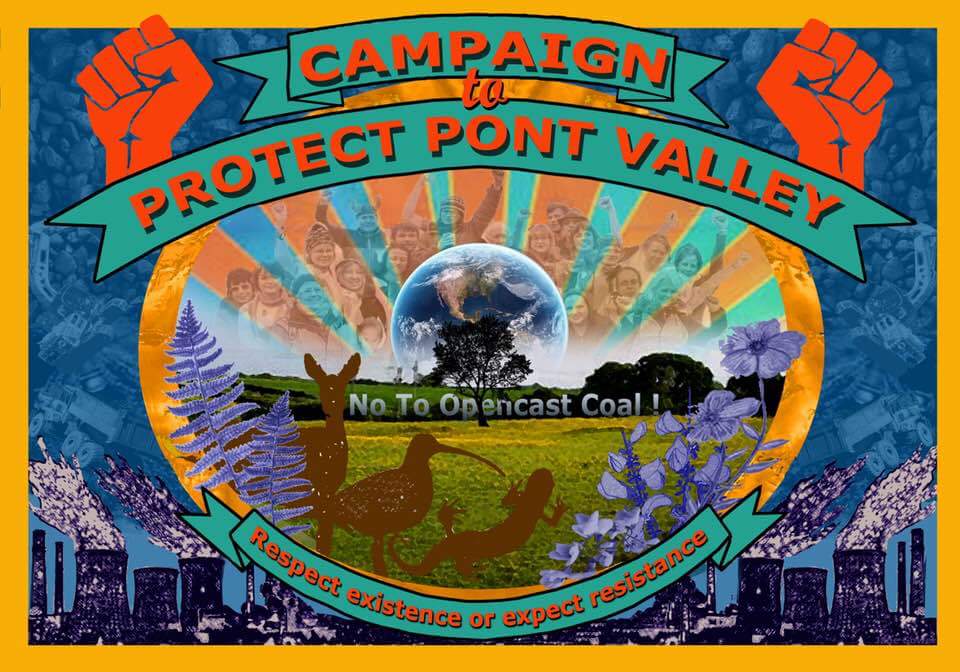