In PnR, the Council rejected fracking plans back in 2015, but the national government overturned this decision, and granted permission to Cuadrilla to construct the largest fracking development in the UK. The company has already constructed an access road and a large frac pad on fields north of Preston New Road and are now drilling two horizontal shale wells. The PnR site only provides 11 jobs.

Several Pont Valley protectors went down to PnR to support the local community resisting fracking. People from far and wide gathered as part of a three month-long period of United Resistance where many actions took place to delay work and prevent machinery from accessing or exiting the site.

My visit to Preston New Road (PnR) on 28 June was moving and informative. I visited for Block Around the Clock and met up with diverse group of people who’d come together in resistance and celebration. Resisting the dangerous development of fracking and celebrating solidarity and the strength that comes from a common and just cause. I danced, sang, listened to stories, shared tasty food and learned about how to stand up to power. The event was brilliantly organized with a nonstop programme of activities from hoola hooping to ballroom dancing. 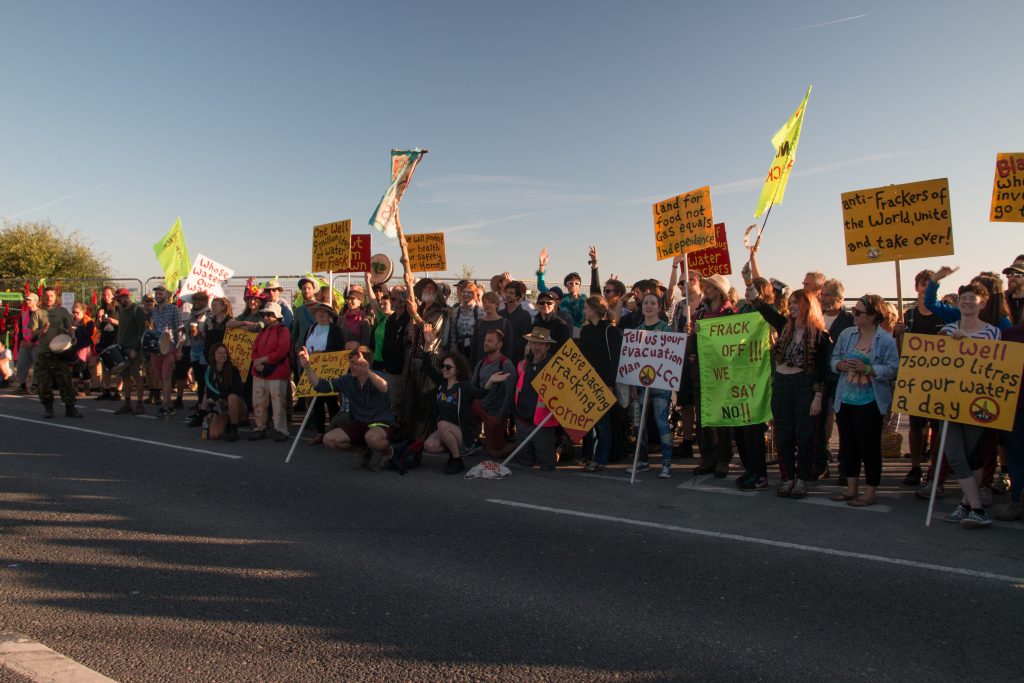 Police presence was low to say the least, with only three relaxed, smiley Police/Protest Liaison Officers, though I know there has been extreme and violent police practice at PnR.

It occurred to me that we are twinned with anti-fracking protests; the only thing that separates us is our geology. In the Pont Valley our geology features sandstone which needs to be dynamited to access coal. In North Yorkshire, Lancashire and other areas threatened by fracking, rock can be split open with pressurised water to release gas. Both methods exploit the natural environment, the land beneath our feet and exploit and damage the communities living nearby.

I returned home energized and invigorated, having made new friends and comrades. Thanks Pont Valley Protectors for encouraging me to visit. Anyone who’s thinking about visiting an anti-fracking site, just go for it, you will be welcomed and inspired.

Get involved in this major battle: http://frack-off.org.uk/local-group-specific-pages/